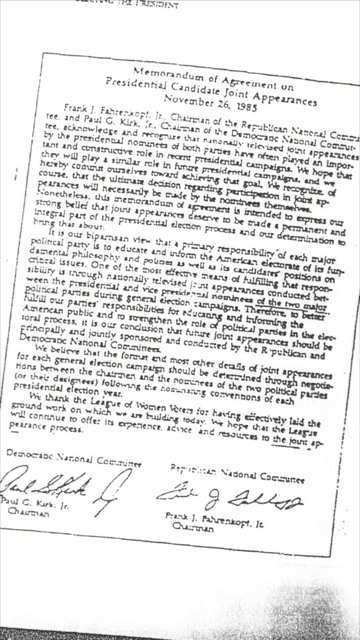 This is the text of the original "Memorandum of Agreement on Presidential Candidate Joint Appearances" -- from November 26, 1985. It would eventually lead to the creation of the so-called "Commission on Presidential Debates."

Many are now wondering why moderators are not "fact checkers" at the "debates". It's partly because of this. These were never envisioned as "debates" -- they were "televised joint appearances" designed to take control of the debates away from the League of Women Voters or any somewhat independent entity. Notice the word "debate" does not appear in this document. The were designed especially to prevent inclusion of other candidates -- unless both sides wanted it.

Frank J. Fahrenkopf Jr., Chairman of the Republican National Committee, and Paul G. Kirk Jr., Chairman of the Democratic National Committee, acknowledge and recognize that nationally televised joint appearances by the presidential nominees of both parties have often played an important and constructive role in recent presidential campaigns. We hope that they will play a similar role in future presidential campaigns, and we hereby commit ourselves toward achieving that goal. We recognize, of course, that the ultimate decision regarding participation in joint appearances will necessarily be made by the nominees themselves. Nonetheless, this memorandum of agreement is intended to express our strong belief that joint appearances deserve to be made a permanent and integral part of the presidential election process and our determination to bring this about.

It is our bipartisan view that a primary responsibility of each major political party is to educate and inform the American electorate o its fundamental philosophy and policies as well as its candidates’ positions on critical issues. One of the most effective means of fulfilling that responsibility is through nationally televised joint appearances conducted between the presidential and vice presidential nominees of the two major political parties during general election campaigns. Therefore, to better fulfill our parties’ responsibilities for education and informing the American public and to strengthen the role of political parties in the electoral process, it is our conclusion that future joint appearances should be principally and jointly sponsored and conducted by the Republican and Democratic National Committees.

We believe that the format and most other details of joint appearances for each general election campaign should be determined through negotiations between the chairmen and the nominees of the two political parties (or their designees) following the nominating conventions of each presidential election year.

We thank the League of Women Voters for having effectively laid the groundwork on which we are building today. We hope that the League will continue to offer it experience advice and resources to the joint appearance process.


For critical context and background, see "'Debates' -- or 'Televised Joint Appearances'?"
Document via George Farah, author of No Debate: How the Republican and Democratic Parties Secretly Control the Presidential Debates. For later Memorandum of Understanding between campaigns, see: opendebates.org/key-documents