Commemorating U.S. Violence from Hiroshima to Iraq
By Sam Husseini 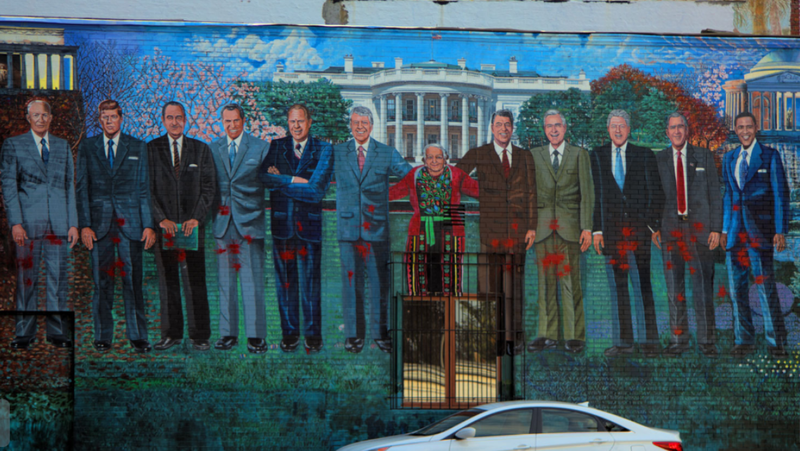 A new political mural has gone up in Washington, D.C.

The mural has been there for a few years, but it's been transformed just recently. Some might say, made more whole, reborn.

It's a mural on the side of a restaurant formerly known as the Calvert Cafe. It features U.S. presidents from Eisenhower to Obama with Mama Ayesha, who founded the restaurant that is now named for her: Mama Ayesha's, just near the Duke Ellington Bridge in Adams Morgan. It was originally labored over by Karlisima Rodas.

The recent transformation involves someone having apparently paintballed all the presidents, shooting them in the balls with red paint. Or trying to. Who ever did this seems to have been richer in inspiration than in sniper skills, which may on balance be a good thing. It's a bit messy, but the intent is fairly clear: Eisenhower, Kennedy, Johnson, Nixon, Ford, Carter, Reagan, Bush I, Clinton I, Bush II and Obama -- all shot in the balls. Scrawled on the side is "The War Thugs."


"'Whether it's arson or, you know, the looting of a liquor store ... those were thuggish acts,' Earnest said.

"In discussing the riots Tuesday, Obama assailed the 'criminals and thugs who tore up the place,' and described them as a distraction from the real issues of police brutality."

An examination of U.S. foreign policy puts the "thugishness" of someone looting a liquor store to shame. From using nuclear weapons, to bombing Vietnam and invading Iraq to deploying killer drones in county after country, the thugishness of these presidents is hard to compete with.

One could imagine the augmented muralist going a bit further, perhaps giving us a lingering blot where Truman's crotch would be were he in the picture. That would be all too appropriate given that Truman gave rise to our "National Security State" and nuked Hiroshima and Nagasaki exactly 70 years ago this week.

The date of the atomic bomb being dropped on Hiroshima -- August 6 -- is also the date of the imposition of the sanctions being imposed on Iraq in 1990, exactly 25 years ago, that would ultimately take the lives of hundreds of thousands of Iraqi civilians, many of them children. The 1991 U.S. bombing of Iraq and subsequent sanctions set the stage for the killing fields we now see -- or rather, don't see and manage to ignore in Iraq and beyond. Yet, the administration of Bush I is regarded by some so-called critics of Bush II as enlightened.

From Hiroshima to Iraq, all these presidents have used violence. Massive violence. An augmented mural could include mushroom clouds in the background, and perhaps jet fighters, bombers and killer drones flying overhead.

Perhaps the greatest violence they've all used is to threaten the world with nuclear weapons. It's not as though the U.S. only used atomic weapons against Japan at the end of World War II.

As Daniel Ellsberg has noted, the U.S. uses nuclear weapons constantly, like a thief robbing people by waving a gun around. You don't need to pull the trigger to "use" the gun.

So, take a look at "From Wounded Knee to Syria: a Century of US Military Interventions" by Zoltan Grossman. Among the U.S. aggression most have forgotten is Eisenhower administration issued a nuclear threat against Iraq in 1958 against invading Kuwait. Or that Johnson invaded the Dominican Republic in 1965; how many remember that? Or that the Carter administration began the Rapid Deployment Force, paving the way for future U.S. Mideast wars and began the backing of the Mujahadeen to undermine the Soviets in Afghanistan.

The paintballing -- a sort of art work that is literally paint as paint -- recalls the Edward Sorel piece that adorns Robert Scheer's book "Thinking Tuna Fish, Talking Death" -- which features "world leaders" dancing the can-can with missiles as genitalia.

There's typically a taboo against graffiti artists "tagging" over each other's work and this would seem to violate it, but there's a case to be made that this more competes the piece than defaces it. Some people, including Karlisima, now seem upset by the addition of the paintballs, but murals are not typically done to glorify the high and mighty, and do so for the Great Leaders in traditions that shouldn't be emulated. The labor of putting together the original mural is not destroyed, it's not painted over, but used to make a perhaps unexpected point. Further, the original mural it seems was not so much done to convey a vision the artist as much as commissioned by the DC Arts Commission and various other governmental bureaucratic entities. The mural that used to adorn that wall was of the Mount of Olives in Jerusalem, where Mama Ayesha was born. But it was replaced and the collective wisdom had it that the environs of Washington, D.C. were lacking in sufficiently honoring our war presidents, pretending all is smilingly well as they are brutal.
The new mural now features Mama Ayesha in her beautiful Palestinian dress bringing the war makers together, their vulnerability, what they likely had thought of as a source of their dominating power, made evident. And they're smiling, accepting, perhaps gaining in empathy.

As it is, there continue to be sprawling U.S. military bases the world over -- and it's not as if things are getting better by any objective measure -- the U.S. just reopened its military base in the Philippines to little notice. All these presidents have continued the U.S.'s backing of Israeli atrocities against the Palestinians as Israel has effectively destroyed a people over their collective tenure.

The paintball artist perhaps admirably exercised restraint from engaging in figurative head shots. After all, virtually every president has killed, not least of all the current inhabitant of the White House, who has commented he's "really good at killing people."
The U.S. is killing people using drones in Somalia, Yemen, Syria, Libya, Iraq, Afghanistan, Pakistan. Obama is often depicted as something approaching a pacifist by some for not having bombed Iran already. Never mind that he escalated the war in Afghanistan, has now stepped up U.S. bombings of Iraq and Syria, bombed Libya along with NATO, and so on and so on.
But our society, media and art largely ignore all this. They focus on celebrity silliness or, worse yet, treat presidents like revered celebrities when their hands are covered in blood that is all too real.