I'm not out to compare myself to Jack Whitten, but on this day, my mind is on his 9-11 story and my own.


I'm sure we all have lots of 9-11 stories, but I told one of mine for the first time in my new art show, "Invisibly Present/Visibly Absent" that just opened at Gallery Al-Quds at the Jerusalem Fund near the Kennedy Center.

The piece is "The Scorching Sun Which Brings Them Forth" (see below).
On Sept. 11, 2001, my then-partner was visiting me in D.C. and was helping out a bit with my media and political work. She was set to leave town that afternoon, but of course stayed after the attacks -- the planes stopped flying and she helped me full time at my job. We worked nonstop, trying to get information out that might avert the coming further catastrophes. After about two weeks, I took her to Union Station so she could finally go back to Texas, where she was in grad school. Exhausted, I walked in the area, ending up at the Library of Congress, where they had a remarkable art exhibit about prophetic visions. Finally, I went to the main reading room, sunk in a chair to feel like I could breathe for the first time in weeks and looked up at the rotunda to see written on a plaque what appeared to be an ironic boast: "We Taste the Spices of Arabia Yet Never Feel the Scorching Sun Which Brings Them Forth." The quote appears to be from Dudley North, a wealthy British merchant and political apparatchik who was treasurer of the English Levant Company.

My really dealing with 9-11 in a painting was partly inspired by Jack Whitten. Below is text from a 2009 interview with the artist, who died in 2018. Everyone has heard his voice, he's the person who says "Holy shit!" in what I believe is the only video of the first plane hitting the World Trade Center. He then made a great painting titled 9-11-01 (below). He talked about both of these below with Judith Olch Richards for the Archives of American Art, Smithsonian Institution.
MR. WHITTEN: Now I was in the street that day when the planes came over. There was a gas leak in the street and I went out with the firemen, which I always do. It's always a policy of mine when I hear fire trucks to go downstairs and see what's going on, especially in that area of Manhattan.
MS. RICHARDS: Especially since you had a fire.
MR. WHITTEN: Yeah, and as I'm talking to the firemen, that sound came over our head, huge, loud, tremendous sound, and all of us looked up. The young Frenchman that was doing the documentary [9/11, 2002] with the fire department swung his camera up. As he comes up, half of my body is in that shot. This is the first shot of that, what happened.
MS. RICHARDS: Would you just say that Lispenard is about a mile north of the Twin Towers?
MR. WHITTEN: About that, or less, yes, quite close.
MS. RICHARDS: Yes.
MR. WHITTEN: Lispenard is a block below Canal Street.
MS. RICHARDS: Right.
MR. WHITTEN: We looked up just in time to see this plane over our head, low, wobbling, making a beeline to the World Trade and ramming into it. On that first video when you hear somebody say, "Holy shit!" that's me. [Laughs.] That was my expression, "holy shit." That damn thing rammed in there and a big gaping hole.
MS. RICHARDS: Yes, I read you said you had no doubt that it was not an accident.
MR. WHITTEN: My gut feeling, I'm there, the [fire] captain I remember was there, my tenant downstairs was there, and I remember the captain said, it's a horrible accident. I said, "man that ain't no fucking accident." Excuse me word, but that's what I said. I said, "no, that ain't no fucking accident" and I remember my tenant, "what do you mean, you saw what I saw, you saw what happened." I said, "damn right I saw what happened but it ain't no accident, no way." That was my gut feeling. I had no logical reason or whatever to say but that was my gut feeling. It ain't no accident.
MS. RICHARDS: Yes, he could have steered slightly and missed the building.
MR. WHITTEN: Yeah, I mean okay I've had a little bit of pilot training, enough to know that I can muscle the damn thing. The captain and his men jumped in the [fire truck] and just went, didn't even think twice. They took all of their equipment, men, jumped in the [fire truck] and went straight downtown.
MS. RICHARDS: Was there a gas leak on your street?
MR. WHITTEN: [Yes, they] left one or two guys there still investigating. We still [had] the problem with the gas leak. Two things [are] going on in my mind, right. We're there still arguing with my tenant about whether it being an accident or not. While we're arguing, the second plane circles around to the south tower and then hit. Then I looked at him straight in the face poking him in the shoulder, I said, "you still think that's an accident" and that time he [and] people were crying, people were yelling on the street. Nobody knows what was happening. But my gut feeling proved to be correct.
MS. RICHARDS: True.
MR. WHITTEN: Nobody could question my gut feeling at that point and then of course the flames. I hate to admit it but I often tell the story about when that plane hit, that was a clear day in Manhattan. The sky was filled with this fantastic chandelier of glass, fantastic. It was totally sublime, glittering.
Before you saw the smoke, before you saw the flames jutting out, you could still see the plane of this thing tucked into the hole. [The tail.] But the breaking of the glass just formed this big chandelier.
I assume[d] that the firemen that went down were just automatically killed. That's what I assume but I was in my local bar like a few days afterwards and I was telling the story of what I saw and I thought these guys were dead and somebody came in the bar and said, "I remember you were telling that story. He says, those guys are not dead. They lived." I felt such relief. [Laughs.] I remember I just broke – I couldn't control my tears because I was talking to them, you know, and they just took off. I just assumed they all died. This person came and says, "no, those guys did live. They're alive man." It was such a relief. Now we were moving out. I had to clear the whole building out, four floors I had to clear out. ..

But I made a vow when that happened in the street that when I got another studio, I made a vow. The first painting I will do will be a memorial to 9/11. That was my vow and I stuck by that vow. ...

MS. RICHARDS: How did you arrive at the form, at the image of the painting?
MR. WHITTEN: From the dollar bill. I'm sitting in the bar one night drinking, thinking about this painting, knowing that I had to have something to start with conceptually. I'm paying my bar bill and I happen to look down at the dollar and I'm thinking, my god, petroleum, oil, money, not a bad place to start, not a bad place to start.
MS. RICHARDS: The image of the pyramid on the dollar bill?
MR. WHITTEN: Yeah, came off the dollar bill, notion of power, symbol.
MS. RICHARDS: And the blackness?
MR. WHITTEN: Right, petroleum, a lot of blood in that painting, gallons of blood.
MS. RICHARDS: Yeah, I've read that. What kind of blood did you use?
MR. WHITTEN: Out here where I live with the Spanish, they make blood sausages. It's pig's blood. So I can buy it directly from the butcher shops. They sell it frozen. I had already done experimentation with blood in acrylic. It holds.
MS. RICHARDS: Had you?
MR. WHITTEN: Oh yeah.
MS. RICHARDS: For what work? When was that?
MR. WHITTEN: For paintings that I was done during a lot of experimentation and I had to use blood just to see what would happen. So I had paintings already that I had made with blood in it. It's an amazing color, by the way. You're talking pure iron oxide. It doesn't fade or nothing. Acrylic sets it. I had already done some experimentation with blood but when I came up with the theme that was the guiding conceptual principle for the painting, blood, petroleum, money, which I think are the three components that caused 9/11, the politics of that. [Whitten also told this story at this talk, see video at 54:35.]


Sam Husseini is a writer and artist living in Riverdale, Maryland. 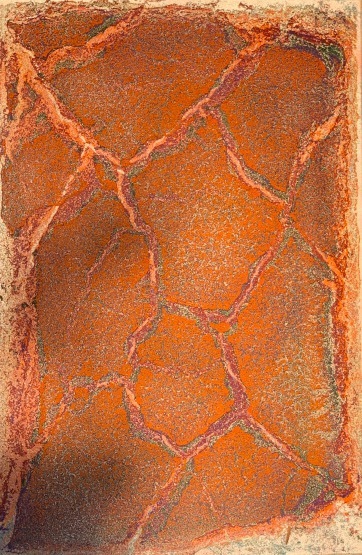