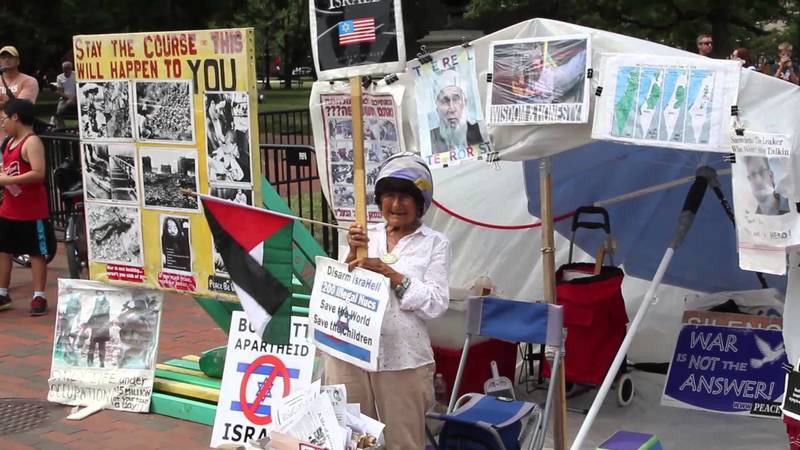 There were some lovely, moving moments in the memorial service of Concepcion Picciotto at Luther's Place Church on Saturday.

Concepcion is known -- with William Thomas, who died a few years ago -- for leading what is apparently the longest protest in U.S. history: Against nuclear weapons in Lafayette Park, in front of the White House. She died last month.

As WTOP -- the local news station -- noted today: "Picciotto’s nuke vigil became a permanent fixture across from the White House for five consecutive presidents, including President Barack Obama, but not one of the presidents ever spoke to her."
Tom Siemer, with trembling hands holding the microphone, sobbed "I built nuclear weapons for 23 years" and then that Concepcion "was so unselfish" -- as she literally died to the end for peace, with failing health, virtually homeless, continuing the vigil. She was almost like a protester who immolates oneself, but in slow motion.
At the memorial service, the speakers included former CIA man Ray McGovern who noted the Washington Post's apparent proclivity for questioning Concepcion's sanity, and asked who was the mad one here given the Post's apparent view that her desire to prevent nuclear war was at best quaint. Her lawyer, who spoke first and long, did some of the same, but seemed at one point to frame the nuclear threat stemming from the doctrine of MAD, mutually assured destruction, as a simple relic of the Cold War. He almost echoed a patronizing tone that one might hear from the Post, referring to his arguments with her, barely disguising an eyeroll.

There were glimmers of Concepcion's radicalness certainly during the service -- she wasn't outright cooped into a banal liberal symbol as Martin Luther King often has been, but, critically, the word "Israel" was not uttered at the memorial in the church. This was incredible since it was hard to go three minutes talking with Concepcion without her talking about Israel -- either its crimes or the incredible threat posed by its unacknowledged nuclear weapons. Her work stressed things that so few do: Israel is perhaps the greatest threat because it has a massive nuclear arsenal, refuses to sign the Nuclear Non Proliferation Treaty, uses violence with incredible impunity and it is an expansionist settler colonial state.
And Concepcion was not -- as some, including Caitlin Gibson of the Washington Post have referred to her as -- an anti nuclear "proliferation" activist. She was for disarmament. Concepcion was clear: "Live by the bomb, die by the bomb." Her point was the U.S. and other nuclear powers live by the bomb and must stop. She was about disarming the current nuclear weapons states; not simply preventing proliferation of nuclear weapons to more states. After all, it is largely the policy of the U.S. government that current nuclear weapons states should maintain them and others should be denied them. The U.S. government occasionally does wage or threaten wars over this issue -- or perhaps I should say, using this pretext.
Concepcion focusing on Israel was at times even jarring even to me -- a Palestinian American -- when I'd talk to her. Don't take my word for it, look up some videos of her. She doesn't go long before mentioning Israel. And if you think it through, for very good reason.
The word "Israel" was finally uttered from the microphone -- after a hundred or so people left the church and went to the site of her long-standing protest in front of the White House, setup there photo-op style by Medea Benjamin of CodePink.
It was left to Simin Royanian, an Iranian-American activist and analyst to utter the word when finally granted the mic. She noted Concepcion's staunch opposition to Israel's Zionism and said she was always supportive of Palestinian and other liberation movements in the Mideast.
Perhaps it's thus with all prophets -- the moment they die, many around them push aside their central statements that seem inconvenient but were actually the center-line to their dedication and integrity.
But, no, Concepcion was largely ignored in life. John Steinbach, longtime antinuclear peace activist and co-coordinator of the Hiroshima/Nagasaki Peace Committee told me: "Concepcion wasn't taken serious by a lot of groups. I can't tell you the number of times I tried to get mainstream peace groups that had protests in Lafayette Square to include or invite or at least acknowledge her vigil which was right there. It never happened." In contrast, Steinbach notes: "The Japanese [nuclear bomb] survivors loved and respected her and always wanted to spend time with her."
The memorial service did feature a Japanese representative reading a statement from the Hiroshima/Nagasaki Peace Committee. Unfortunately, it also offered a fair number of clichés -- "We Shall Overcome" and a lengthy homily presuming to praise the prophetic voice while ignoring much of the substance of it, instead repeatedly invoking the song "Turn, Turn, Turn".
But there was nothing cliché about Concepcion.
She had a pointed, high pitched, Spanish accented voice and would utter totally political incorrect statements. "Don't Be a Lemming -- Save Yourself -- Renounce Genocidal Weapons" read her sign. "Silence is a war crime." She'd be good at staying on message as they say, repeating what her signs would say. "Bush is war criminal" she'd repeat.
And she held signs on Israel up high and unapologetic: "Judaism YES / Zionism NO" and "Disarm IsraHell -- 200 Illegal Nucs -- Save the World -- Save the Children" and "Stop Funding Israeli Terrorism."
Great stuff.
But she did make political statements on Israel that I would never make; and I didn't delved into her personal struggles with other activists, which were apparently contentious at times. One sign she'd hold up was "One Nation Under Israel" (which featured a U.S. flag with a star from the Israeli flag on it) and another: "Terrorists Are Us -- 'Holocaust:' A Word Used by Zionists to perpetrate Crimes Against Humanity" (with a swastika scrawled in) -- which featured the website of Neturei Karta - Orthodox Jews United Against Zionism.
The Nazi "Holocaust" isn't just a "word" that's been used for murderous purposes of course, but also an actual historical fact. But she didn't write that it was "just" that, though many may have read it that way. Nor do I subscribe to the view that the U.S. is "Under Israel". In fact, I don't much see nations any more. I mostly see forces: imperialism, colonialism, corporate capitalism, white supremacy and misogyny asserting their power and how other forces resist and are complicit with them.
But I've not seen any of Concepcion's signs on Israel any more at the memorial, which is continuing and seems to be sanitizing itself. As I write, the vigil does have one sign about an upcoming protest against AIPAC -- so it's apparently still alright to criticize rightwing Zionist groups -- and perhaps unintentionally pump them up -- but not the more liberal varieties. This type of framing divorces the centrality of Israel's nuclear weapons, which the U.S. government has rendered it forbidden to speak of, from the anti-nuclear work on the vigil.
Really, did you catch that? It's illegal for U.S. officials to talk about Israel's nuclear arsenal. As Grant Smith has found: "Under two known gag orders -- punishable by imprisonment -- U.S. security-cleared government agency employees and contractors may not disclose that Israel has a nuclear weapons program." So perhaps score one for the "One Nation Under Israel" camp.
But ignoring Israel's nuclear weapons has the ironic effect of the naive viewer wondering "why pick on Israel?" -- since the Israeli nuclear arsenal -- which was the brainchild of liberal Zionists Ben Gurion and Shimon Peres -- is sidelined instead of being front and center.

Concepcion was certainly difficult, at least for me, to talk with. I tried helping her find housing at one point, which might have lead to connections that might have helped, it was hard to tell at times, but she was undoubtedly a handful -- only housing around the White House would do of course. As if that were selfish of her. I end up wishing I were more patient in trying to help her; God knows she was patient with us.
Still, I wished that the protest would be more understandable, it certainly came off as eccentric at times. But I think that can be fixed without it being effectively sanitized, which seems where it is headed.

Front and center are now typical banal signs, which were back bench material for Concepcion: "War Is Not the Answer". Really? I've got news for you: War often is the answer. War can be exactly the answer if the question is how to effectively dominate the planet, which it often is to many.
The memorial service put on for Concepcion featured a rendition of "Ain't Gonna Study War No More." I disagree. We actually haven't studied war nearly enough. The "peace movement" needs to get over itself and talk about war: the death, destruction, flying limbs and stench of it in precise terms if it has any interest in actually changing things and not just feeling superior to those dreaded Republicans.
Fast disappearing from the vigil is what was central to Concepcion: by embracing a radical humanity, discerning the taboos of the establishment, she rightly raged against them. At the current rate, I fully expect "Free Tibet" signs to pop up at the vigil.
In my chatting with her occasionally over the years, I think Concepcion pointed to a central truth -- that colonialism and Zionism were central forces threatening the planet. And that central truth is continually obscured by people talking about neo-conservatives or liberal interventionists instead of seeing an entire neo-colonial project at work, or perhaps not so "neo" at times -- just plain colonial. And one should be clear: She didn't really single out Israel as some do -- she'd talk about unmentionable U.S. "terrorism" and "war crimes" as easily as Israeli.
If she seemed to become overly persistent on imperialism and Zionism and Israel's unacknowledged threat to humanity, I think it was a reaction not just to those threats and officialdom and not just to corporate media -- but also "progressive" activists' silence on central questions of nuclear armed Zionism.
Unfortunately, her own memorial service became a monument to that silence.