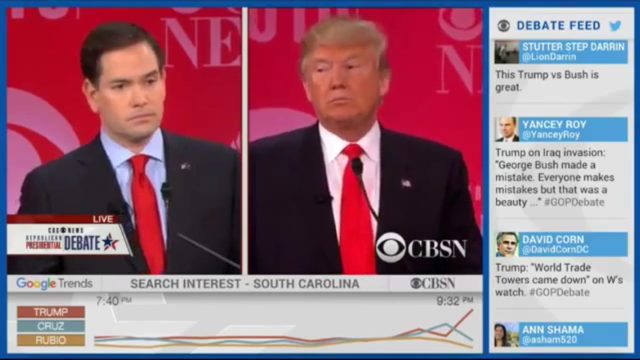 At first I thought it ironic that Saturday's Republican debate happened in the "Peace Center" in Greenville, South Carolina. [video and transcript]

But perhaps that had a positive effect.

Actually, no. For the discerning listener, Donald Trump has been critical of U.S. militarism for some time. On Russia, on Syria, on Iraq and on North Korea.

People say that Trump is loud. But I don't think he's been loud enough.

Last night, he finally screamed an anti war stance to the boos of Bush's and Rubio's and Kasich's one percent donors. It's only half of what needed to be said, but it was a measure of reality that's desperately needed.

Trump: "You fight ISIS first. Right now you have Russia, you have Iran, you have them with Assad and you have them with Syria. You have to knock out ISIS. ... You can’t fight two wars at one time." But of course, to some of the U.S. establishment, two wars is slacking, they want more than two wars. Trump continued: "We shoulda never been in Iraq. We have destabilized the Middle East. They said there were weapons of mass destruction. There were none. And they knew there were none. ... The World Trade Center came down (BOOING) during the reign. He [G. W. Bush] kept us safe?"

And, if anyone noticed, even as the auditorium packed of monied interests booed Trump, the tracker at the bottom of the screen went up for him.

Trump's truth telling was met with more ridiculousness and lies.

Jeb Bush described Trumps attacks as "blood sport" which, given the subject matter at hand -- his brother's appetite for illegal war and failure in his responsibility to protect the U.S. public -- was, to put it mildly, ironic. And then Bush appealed to the values of his family, which, evidence would show, includes hands quite drenched in blood.

John Kasich's reaction on Iraq WMDs was to appeal to Colin Powell's credibility, which has been a late night TV joke for over a decade. He also claimed the U.S. got into a civil war, which is wrong -- the U.S. government helped foster the sectarian violence. And no, Kasich, the borders of the Mideast were not "drawn after World War I by Westerners that didn’t understand what was happening there" -- they were drawn by Westerners who wanted to divide and rule -- as is the actual goal of Western interventions to this day.

Marco Rubio was perhaps the most priceless -- "Saddam Hussein was in violation of UN resolutions, in open violation, and the world wouldn’t do anything about it." That's a total lie. Iraq had disarmed and the U.S. did everything it could to prevent the UN from verifying that disarmament so that the draconian sanctions would continue on Iraq indefinitely and they could have their regime change war, see my time line: accuracy.org/iraq.

The worthies at the Weekly Standard now write: "Interviewers should press Trump on this: What evidence does Trump have that George W. Bush and his top advisers knowingly lied about weapons of mass destruction in Iraq? How many other government officials does Trump believe were in on the deception? What does Trump believe would have been the point of such a lie, since the truth would soon come out?"
In fact, it's quite provable that the Bush administration lied about Iraqi WMDs before the invasion. I know, I helped document such lies at the Institute for Public Accuracy, where I work, before the 2003 invasion:
In October, 2002, John R. MacArthur, author of Second Front: Censorship and Propaganda in the 1991 Gulf War, noted: "Recently, Bush cited an IAEA report that Iraq was ‘six months away from developing a weapon. I don’t know what more evidence we need.’ The IAEA responded that not only was there no new report, ‘there’s never been a report’ asserting that Iraq was six months away from constructing a nuclear weapon." That's just the tip of the iceberg of what was knowable at the time. See other such news releases from before the invasion: "White House Claims: A Pattern of Deceit" and "Bush’s War Case: Fiction vs. Facts at Accuracy.org/bush" and "U.S. Credibility Problems" and "Tough Questions for Bush on Iraq Tonight."
The problem in 2002 and early 2003 was that Bush didn't get those tough questions. Just like there are no real tough questions about U.S. policy in Libya, Syria, etc. now.

What we're getting is Trump raising these issues years later when it seems some of the public is finally/still willing to hear them. And that's splendid. The establishment has tried to just keep rolling along with their wars and deceits after the Iraq invasion. No accountability, no nothing. They make Wall Street look like self-critical introverts. To answer the Weekly Standard's question -- the truth still hasn't come out in full force; Bush and the other pro-war deceivers have managed thus far to get away with it all.
The only problem with what Trump is saying is that he's not saying it loud and strong enough. He didn't back up the case for impeachment against G. W. Bush for the Iraq invasion, which was the point of one of the questions to him, though several legal scholars have done so, including Francis Boyle, Jonathan Turley, Bruce Fein and Elizabeth Holtzman. Reps. Dennis Kucinich, Cynthia McKinney and John Conyers, in different ways and at different times, pursued the possibility.
Some are deriding Trump for apparently exaggerating his objections to the Iraq war in 2003 and 2004. Maybe so, but the fact of the matter is that most who spoke out meaningfully against Iraq war early were defacto drummed out of establishment media and politics.

Trump is being Buchanan 2.0 -- that there's some real bad that comes with that and there's some real good that comes with that. And quite arguably in a post 9/11 world, the good is more important than it was in 1992.
As I've written elsewhere, I have no idea what Trump would actually do in office and what his current motivations are. He's been contradictory, but the thrust of his comments is quasi isolationist. His campaign should certainly be a huge opening to groups wanting to reach out to millions of working class whites on issues of foreign policy, trade, as well as some core economic issues.
And even on foreign policy, Trump can be extremely dangerous. For example, the apparent force behind his anti Muslim comments is Frank Gaffney, a rightwing pro-Israel militarist.

The point is that what Trump is appealing to is an electorate that is sick of deceit and perpetual wars and there's a lot of good that comes with that. It should be an opportunity for anyone claiming to care about peace -- and not a cause to mock the people supporting him as I've seen many "progressives" do.

But, for the Democrats, the import now is this: What's it going to look like if Trump is the Republican nominee? If Clinton is the Democratic nominee, Trump -- with very good reason -- will tie the stench of perpetual wars and the lies that accompany them around her neck. She will make the 2004 John "I-was-for-the-war-before-I-was-against-it" Kerry look like a stirring exemplar of gracefully articulated principles.
If any Democrat cares a bit about electability, Clinton -- the candidate not only of Wall Street, but of endless war and of the war machine -- should have been dumped yesterday.

This is the personal (mostly political) blog of Osama "Sam" Husseini, a writer and artist living in Riverdale, Maryland. Bylines in The Nation, Consortium News, CounterPunch and elsewhere. He is senior analyst for the Institute for Public Accuracy. He's also founder of VotePact.org -- which helps break out of the two party bind. See his CV.