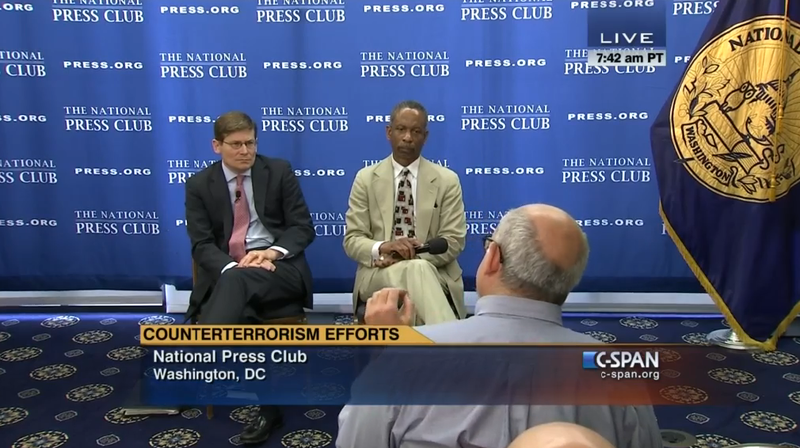 On Monday, I questioned former acting CIA director Michael Morell about the lies leading up to the Iraq war and their relation to torture. (See below for video and transcript.)

He's been making the rounds on talk shows and started the talk today by speaking about the alleged "failures" of the "pre-war Iraq intelligence," echoing a frequent mantra. The claim is that somehow the Bush administration and others didn't engage in propaganda and deceit to sell the Iraq war, but rather, were themselves victims of bad intelligence.
So I cited a claim by the Bush administration made during the run up to the Iraq war that was provably false before the war. On September 7, 2002, Bush held a news conference with then-British Prime Minister Tony Blair. Bush claimed there was an International Atomic Energy Agency report that claimed Iraq was "six months away from developing a weapon. I don’t know what more evidence we need."
John R. MacArthur, author of Second Front: Censorship and Propaganda in the Gulf War, highlighted -- at the time -- that, when questioned, "the IAEA responded that not only was there no new report, ‘there’s never been a report’ asserting that Iraq was six months away from constructing a nuclear weapon."
When I confronted Morell -- who was Bush's briefer -- about Bush's statement he took no responsibility at all. "So, you know you have to ask him. You have to ask him," Morell said.
I found it so laughable that he would say this instead of directly responding to the false statement that my initial reaction was not to bother following up on this. If he's not going take any responsibility for Bush's false public claims, what's the point? I'd rather expect that if I were able to corner Bush and ask him enough follow up questions, he'd probably excuse his false statements by saying that's what his briefers told him; so they'd be hide behind each other. However, Morell also said "The only thing I can tell you is what we were telling them at the time." It would certainly be worth while to ask him what he was telling Bush about this -- or claims he was.
I then asked Morell about the Shaykh al-Libi case. Contrary to the depiction in movies like "Zero Dark Thirty" -- which Morell had a hand in -- that torture is used to get the bad guys, the al-Libi case shows that torture is used to get false but useful information. That is, al-Libi was tortured him into "confessing" that Iraq was working with al-Qaeda.
Morrel gave a lengthy objection to my use of the word "torture," then he challenged the notion that it was done at the U.S. government's behest, questioning what evidence I had for that. The moderator cut off the discussion at this point.

Marcy Wheeler succinctly notes about his response here: "1) He doesn't deal with torture that exceeded and/or preceded DOJ guidelines. 2) Which al-Libi's torture did 3) that he doesn't actually deny al-Libi was tortured 4) which is interesting because he got the same treatment as Abu Zubaydah."
Al-Libi was captured by the U.S. in Afghanistan and turned over to the Egyptians by the CIA and then tortured into saying what the U.S. government wanted him to say -- that Iraq was tied to al-Qaeda -- his "confession" was featured in Colin Powell's speech to the UN just before the Iraq invasion. (See my "'Both Sides' Are Wrong: Torture Did Work -- to Produce Lies for War.")
But it's totally out of bounds for me to suggest that his torture was at the U.S. government's behest, it merely provided him to the Egyptians and benefited from his "confession" to start a gigantic war based on "evidence" that the Bush administration is merely the victim of -- or so Morell would have us believe.
There's been a fair amount said about "if we knew now what we knew then" about Iraq. I've tried to debunk the notion that we didn't know the Bush administration was falsifying, propagandizing and lying to start the Iraq war at the time. And many, including myself, did real time debunking. See: "White House Claims: A Pattern of Deceit" "U.S. Credibility Problems" "Tough Questions for Bush on Iraq Tonight."

But we should consider this question in one respect: Given what we know now, why are people like Mr. Morell being taken the least bit seriously and why are they not being prosecuted?


One other line of defense by Morell bares comment -- and one that few take exception to. When I questioned him about the Bush falsifications for war, part of his response was a say that such statements were made during the Clinton administration. Which is true. The Clinton administration did lie about Iraq, including WMDs and many politicos -- not just Jeb Bush -- continue to fabricate the record. That in no way defends what the Bush administration did. It merely highlights that establishment Democrats like those in the Clinton administration and others who voted to "authorize" the Iraq invasion are also culpable.
Just because both Bushes and Clintons say something doesn't mean it's not a lie, merely that it's a particularly destructive one.

Former CIA analyst and presidential briefer Ray McGovern wrote a pair of relevant pieces, one recently ("The Phony ‘Bad Intel’ Defense on Iraq") and another, from 2011 ("Rise of Another CIA Yes Man") on Morell when he was acting CIA director.
Video of full event with Morell at National Press Club.
Video of Morell questioned by Sam Husseini.
Transcript:
41:00

SAM HUSSEINI: Sam Husseini with IPA. Just to sort of get a baseline here. You were a briefer for George Bush for 9/11 and after 9/11.

MICHAEL MORELL: I was President Bush's first intelligence briefer, so I briefed him kind of the entire calendar year of 2001. Yes.

SAM HUSSEINI: You're not acknowledging that the Bush administration falsified information on Iraqi WMDs and other aspects in the build up to the Iraq war.

MICHAEL MORELL: I'm not acknowledging it because it's not true. It is a great myth. It is a great myth that the Bush White House or hard-liners in the Bush administration pushed the Central Intelligence Agency, pushed the U.S. intelligence community and every other intelligence service in the world that looked at this issue to believe that Saddam Hussein had weapons of mass destruction. All they have to do is tell you this, that the CIA believed that Saddam had weapons of mass destruction programs long before George Bush ever came to office. We were telling Bill Clinton that.

SAM HUSSEINI: One would not be following Iraq to say the Clinton administration never falsified information on Iraq as well. So for example when Bush --

MICHAEL MORELL: I'm just not with you on the falsification, but go ahead.

SAM HUSSEINI: Yeah, well I'm putting evidence if I could.

SAM HUSSEINI: So in September 2002, when he was at a news conference with Tony Blair, and this is just one example. That there was an IAEA report saying that Iraq was "six months away from developing a weapon. I don't know how much more evidence we need." And then IAEA says there is no such report -- that was just an honest mistake?

SAM HUSSEINI: So you, among other things, in your time of the CIA had a role in "Zero Dark Thirty," which in effect glorifies the use of torture to gain "intelligence." I want to ask you about a different case and that's the case of Shaykh al-Libi, who all evidence indicates, was tortured by the Egyptian authorities at our behest.

MICHAEL MORELL: -- But your premise is wrong.

SAM HUSSEINI: And you can say that if you like. Who was tortured in order to say that Iraq and Al Qaeda were related. This is actually in the latest Senate report on torture, among other places. Contrary to the mythology that torture breeds good intelligence -- or that it's immoral -- it actually breeds intentionally useful but false information. Why not?

MICHAEL MORELL: Okay, so I'm going to go back to your first comment about CIA's enhanced interrogation techniques, which you call torture. Which I want to challenge that premise right off the bat. When the Central Intelligence Agency used enhanced interrogation techniques to get information from Al Qaeda detainees, the Justice Department of United States of America on multiple occasions said it was legal, said it wasn't torture. Okay, so for you to call it torture is you calling my officers torturers. And the Justice Department of United States of America said they were not. So I'm going to defend my officers to my last breath in people calling them torturers. Number two, I'm going to challenge your premise that the Egyptians tortured al-Libi at our behest, at our behest. Not true. We never asked the Egyptians to torture al-Libi. What is your evidence for that?

HOST: Let him give you that evidence off-line. We have other people who want to ask questions.